Chasing “down” the blood sugars – The Chicago Marathon Race Report

This was Chicago Marathon #7 for me and my 23?ish marathon in total.  Was it a PR-no, but damn I felt really good.  I really wish I could explain why.

I had never run a marathon without officially training for it.  I mean following a marathon training program.  Was I in shape?  Yes Was I capable of finishing? Yes.  Yes I had completed an Ironman, a Leadman and a few other races here and there but running a marathon is such a different beast than doing those other events.   If you don’t carefully pace a marathon that infamous “marathon wall” can hit you hard. So, I had no idea what to expect. I guessed conservatively that I would run between a 9 – 10 minute pace based on some race times and my long Saturday runs I coached.

I picked up my race packet on Friday after work then headed out for a post “Leadman” pre”marathon” dinner with Tom.  Saturday was the first in a long time I’d actually get to sleep in. Well, despite the late night festivities on Friday night I found myself unable to sleep in.  I got up at 6 to do some work.  I tried to go to bed later but ended up reading magazines and not sleeping!  Sitting around made me feel  stiff and sore so decided to get out and do something. I went to the gym to hit the pool and sauna.  I swam a few lengths and got my heart rate up for a few.  I also did some pool jumping jacks and some pool running.  I really felt like it stretched out my muscles. I would highly recommend it.  It was just what I needed.  I got home and ate various snacks – sushi, a bowl of soup and some leftover pasta.  Then headed to bed at an early hour.

My alarm did not go off so I bolted up at 5 realizing I had slept in.  I got ready and ate my bagel, almond butter and banana with a reduced bolus of 80% with a 238 BG so about 5.5 units.  I had been having a rough week with inexplicable late night highs. Perhaps from the lack of working out that week?  Tom dropped me off at FFC South Loop, I put my disposable layers on and got to greet all the runners and wish them luck.  The temps were to be in the mid-30’s.  I wore my trimonser triathlon kit with a sheddable jacket then a throw away long sleeved top with a hat and gloves.

I packed two packets of blocks, a gel to eat early on in the race, endurolytes and a $20 bill (in event that my plantar fasciitis kicked in or my tight hamstrings gave out or anything else for that matter!).  I had my dexcom with me.  I decreased my basil to 60%. My plan was to go out easy at a 10 min / mile pace or so then pick it up for the last 13 miles. 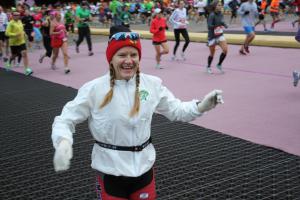 As we lined up to start at around 7 I looked at the Dexcom reading.  It showed my BG’s going up.  I thought, that is ok it is just the mismatched timing of the bolus and my food.  I felt confident that it would go down.   The race started, I shed 1 layer of clothing went on my way.  I saw my friends Katie, Jay and Rob at the 0.5 mile and gave them hugs and kisses not worrying about the time (see picture they took above).  At about mile 2ish I was looking for my friend Erin at State and Lake because I knew she would be there.  Well, she saw me first and screamed so loud, scarying me half to death!  It was pretty funny.  My insulin pump actually popped out of its clip and dangled from the cord! Ha! At mile 3 or so some people were handing out little Dixie cups of beer, so I thought maybe it would settle my stomach. I had a few sips.    With continued high blood sugar’s I gave myself a  bolus of 0.4 units then knowing how important nutrition is early on in the race at mile 8 I took a gel and bolused 0.6 units. I was still very high at that point. I was pretty upset about it but tried to just keep enjoying the run.  I still felt ok so that is all that mattered.  I also ate a few blocks and drank some Gatorade and water at each and every aid station.  All the while, I would catch myself running faster than my planned pace and tried to hold back.  I could see that I was knocking time off my pace as I ran by each clock at the mile markers. I saw my friend Jeff at Merchandise Mart which gave me a little boost. I had hit the halfway point at 2 hours which put me at a 9:15 pace or so.  A little faster than I had planned but I still felt good.  Knowing that the tough part of the race was yet to come I still didn’t think I was in the clear, however, at this point I thought I’d pick up the pace, as planned, and deal with crashing at the end. At that point my blood sugar started to  tank.    The blood sugar dropping is good, dropping fast is not so good. At around 10 am or 16+ miles in I felt it and inhaled several blocks at once and drank a couple of cups of gatorade. Finally it leveled off. The next 4-5 miles I felt really good and I took in all the sites, sounds and cheers.  I high-fived and smiled the entire way. Passing the 17.8 mile gu station was a great milestone however I was still waiting for that wall to hit me in the head.  I kept running and kept picking up the pace.  As we turned South on Ashland off Taylor I heard the unmistakable booming voice of VQ’er Dave Noda, so I ran over to give him a high five.  I passed through Pilsen with the mariachi music and dancing.  Then one of my favorite spots I think near mile 21 where there was a group of older folks playing Gangnam style and dancing the dance. Holy Hilarious! http://www.youtube.com/watch?v=9bZkp7q19f0.  I continued with eating blocks and drinking Gatorade and water and each aid station.  I started to turn it up even more dropping to an 8:30 pace.  At mile 23 I passed the “hashers” friends of my friends Steve who serve beer on the course and took some nice gulps of the cold beverage.  Just enough to savor the flavor and the bubbles, sort of like drinking a coke during an ironman 🙂 .   With the little boost from the beer,  I picked up the pace finishing off the last 5k in 8 minute miles.  I ran past my cheering section (Tom, Katie and Helen <3) at their usually location 1 mile from the finish just outside of Krolls ( a bar of course).  Headed up Roosevelt I cheered on one of my fellow ADA runners and sprinted to the end to finish in just over 3 hours and 50 minutes.   I felt great the entire time, I didn’t hit a wall, not even a fence.  Again, I think there is something to be said for not racing under time pressure and of course negative splits! Here is my Dexcom report for the marathon:Chicago Marathon 2012 Dexcom_1

I also learned a few things:

Check out this chart on the average finish times and gender split!

I headed back to the gym where all our runners I had coached were going to arrive within the next hour or so.  It was the icing on an already awesome cake to see them all arrive one by one and to hug every single one of them.  We had spent nearly every Saturday together for the last 18 weeks.  They had all worked so hard to get that medal around their necks!  I was prouder than punch!

Another awesome part of the day was getting to see my TEAM WILD friends!  I love love love seeing these guys. I feel so blessed to have them all in my life. We had all trained together for Ironman Wisconsin, all Type 1 diabetics and 1 Type 3 (10 of us!).  We all support each other in our athletic endeavors along with all the Type 1 crap that we deal with each day.

We spent the rest of the afternoon drinking bud lights and munching on Pizza watching Da Bears! Great Day!

The following couple of days were pretty brutal.  I was fairly sore and walked like this:http://www.youtube.com/watch?v=m-hCuYjvw2I my Plantar Fasciitis was pretty bad but feels ok now- a few days later.

Next up is the NY Marathon in a little less than a month.  My plan for the next few weeks (after this recovery week). Is to do a lot of swimming, some hill work, some speed work and some strength training and no long distances…. we will see how this pans our.