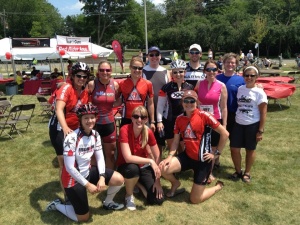 Today I did the Chicago Tour de Cure ride for the American Diabetes Association.  I LOVE this ride for many reasons.  First and foremost what better reason to ride than to raise money for such a great cause.  Second, it is a well organized, well marked course which has several options for all types of riders (new, experienced). Lastly, I get to wear my red rider cycling jersey.  Every person that registers for the ride who has diabetes gets to wear one.  Sort of a call out to say “hey, i’m doing this and i’m diabetic”!  You get to also cheer on your fellow diabetics because they have the red rider shirt.  The back of the shirt says “I ride with diabetes”.  You basically get treated very special for that one day.  The red rider program was started by the woman who also started Team Wild (We inspire life with diabetes) Mari Ruddy.  She is an amazing woman who’s goal in life is to help people with diabetes live a wonderful healthy life which includes exercise!  You can read her story here:  Tour de Cure Red Riders – Mari Ruddy.  TeamWild is the group I did my first Ironman with.  I have forged many beautiful, long lasting relationships with some very special diabetic women.  Awesome!

The alarm went off at 4:45 and we were suppose to leave the house at 5:30.  Tom was riding 35 miles so he drove and came with us.  The rest of us planned to do 100KM or 100Miles.  I was doing the 100KM.  I’d had a rough night. I knew my BG was high during the night, having to get up to go to the bathroom several times.  However, I was exhausted and didn’t check.  Sure enough I woke up at 257.  I had a feeling that it was due to my insertion site which I think was going on to day 4 as I was getting the “low reservoir” warning.  So I changed the site and dosed for breakfast – banana, sandwich thins, and almond butter.  Approximately 35g carb (4.5 units).  We took a while to get ready and had trouble with the new bike rack but we finally made it out the house at 6am.  We picked up April and drove an hour to Wheaton.  The nice thing about today was that there was no pressure, it wasn’t  a race it was just a nice ride!  Tom and I started about half an hour after the 62 mile group left and shortly after, he split off to do his 35 miles.  I’m not sure if it was becase of the lack of pressure but I felt great.  I soon caught up to the rest of the crew.  I tested at the aid station (mile 35 or so) and was at 161.  I didn’t make any changes to my basil rates (0.75 units/hr)  nor did I bolus.  Until that point I  eaten about 4 clif blocks (30g), sipped on some diluted gatorade and had 2 small clif bars (10g carb?? each) .  This particular aid station was the “Country Garden Cuisine”  A cooking school.  They served quinoa , turkey wraps and delicious water melon.  So I had 1/2 cup of quinoa and 2 slices of juicy water melon.  I rode along with the group for a while then parted ways at the next aid station, where Katie’s family had cold drinks and freezy pops!.  I rode the remaining 24 miles pretty hard and felt good.  I consumed a few more clif blocks and another small clif bar. At the last aid station I wasn’t going to stop but decided to anyway…. I was glad I did because the volunteers all gave me kudos for being their first female red rider to pass thru!  I made it quick and finished the ride “chicking” a few fellas on the way.  A couple of them tried to pass me but they were no match for Paddy!  I finished the race at an awesome BG of  126.  I think I’ve found the magic combination – no stress and no swim = GREAT BG’s!  Winning combination.  We all met up and had a sandwich courtesy of the ADA and talked about our day I bolused 5.0 units for the sandwich since it was a pretty “bready” sandwich.  Then we headed to Two Brothers Brewery an awesome craft beer maker in the area for some cold beer and some nachos (post meal BG 98)!  Big Congrats to Katie for her first outdoor ride and completed all 62 miles!  And to Carol who is training for her first ironman rode 90 miles in the heat after a half marathon yesterday!  Way to go girls!   What a great day!

I am a type 1 diabetic diagnosed at the age of 30. I run marathons, participate in bike races , ironman triathlons and everything in between.
View all posts by Gillian →
This entry was posted in Race Reports, Uncategorized and tagged blood glucose, bolus, Team Wild. Bookmark the permalink.