This year and IMOO training.

So here I go again.  In two weeks I’ll be hopefully finishing my fourth ironman.  When I signed up I had every intention of beating my previous course record which was also my first ironman in 2011.  I started off the year building a huge cycling base with a 6 day cycling camp in Spain, several gravel races, another 3 day camp in Wisconsin and finally Dirty Kanza a 200 mile gravel race.  I really felt myself getting strong on the bike and it showed as I finally took a power test putting me 10% over my previous test.

After Kanza I went into serious ironman training mode.  My swim still sucked but I was working on it.  I hired a swim coach.  I was doing decent paces on my tempo runs and it felt great.

At the beginning of July I ran into a roadblock well actually it was a giant recumbent tandem bike parked on the road (sans owners).   It was a charity ride in the suburbs with not a car in site and I was having a great day. I was in aero on the tri-bike going 25 mph.  The result of the crash was a large deep gash down to the knee cap and bruised ribs.  I got 6 stiches in the knee which were conveniently located right on top of my knee cap so bending my knee was not an option.  Although my injuries were not earth shattering.  I was unable to swim, bike or run for about 4  weeks during peak ironman training.  I remember the first time I tried to pedal after the accident.  I had rented a divvy bike to get from work to a friend’s party.  With each pedal stroke I cringed with pain and I ended up pedaling with one leg while keeping the other straight.  I tried swimming that day and got in a few hundred yards before my ribs started to hurt.

Since then I have recovered for the most part.   My ribs still hurt a bit and my knee still aches but I am able to train without much discomfort.

Unfortunately although my body recovered my mind didn’t I was unable to get the momentum back.  I no longer had the drive or the focus.  In addition around the same time my beloved 15 year old cat Ruby was stricken with cancer.  I felt compelled to stay at home and spend her last days with her rather than train.  I was also suddenly overwhelmed by many memories of the past 15 years.  I had gone through a pretty rough patch in my life back then and am not particularly proud of some of the things I did.  Things came back in my head that I thought had been gone forever.  I struggled with making the decision of whether to start the race and the struggle caused me some anxiety.  I don’t operate very well when I am not focused.  If I am not set on my goals or my plan my mind gets mixed up and I can’t function very well and I second guess everything.  I’m not good at making up a workout or a plan as I go along.  In the meantime while recovering, I was given a promotion at work.  I have gone from having 1 direct report to nearly 50.  This has fatigued me mentally when I needed to be strong mental focus the most for my IM training, it just wasn’t there.  I found myself exhausted from the day at work  without the willpower to do a workout and just wanted to drink wine.  When my weekly hours should have been 15+ I was lucky to get in 8 or 9.  As my teammates racked up the hours mine dwindled and I was spending more time at home and making excuses than I was training.

With July over Ruby was put to rest and I decided to get to the start line at IMOO.  I know that in a few years this will just be a “blip” in my racing career.  There will be plenty more!   I feel that my biking base will hopefully carry me through.  The swim will be like always – slow and the run – who the heck knows.  I haven’t even done one triathlon since November 2013 when I did IMAZ.  I have no race plan I have no nutrition plan I haven’t been practicing my nutrition or with proper insulin levels.  I am a hot mess of an Ironman Athlete. 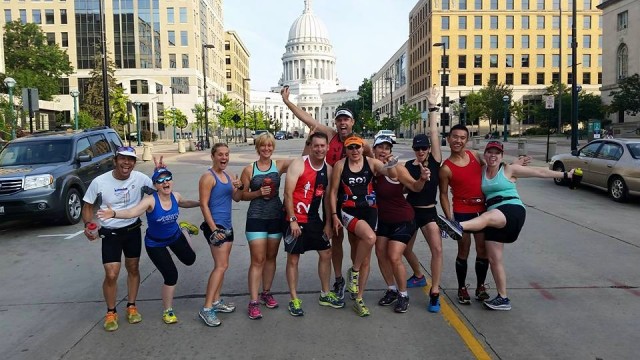 I signed up for the Michigan Titanium Aqua bike which was a full 2.4 mile swim followed by a 112 mile bike.  I planned on doing a short run afterwards it was going to be my last big test.  I headed out on the swim feeling pretty good but as I swam I started to get nauseous.  I had never felt this on the swim.  I could only assume it was my blood sugar.  My goal of swimming long and strong was shattered… instead I paddled about and float on my back every so often to try and avoid throwing up.  I got out of the swim feeling awful. I tested my blood sugar and it was all good at 155.  I got on the bike course.  I felt strong on the bike but as the miles clicked by I couldn’t help but think that I wasn’t really enjoying it and how much I prefer my gravel bike races over the post-swim tri-bike pain in the neck and back.  I really just wanted to quit but I would never do that.  Unfortunately for my training plan the race ended up being cancelled half way through the bike due to a lightning storm.   Although I knew I need to get the training in I was happy that it was done however again I had once again doubt about the big dance on September 13.  I failed the test miserably but I had fun with the girls! 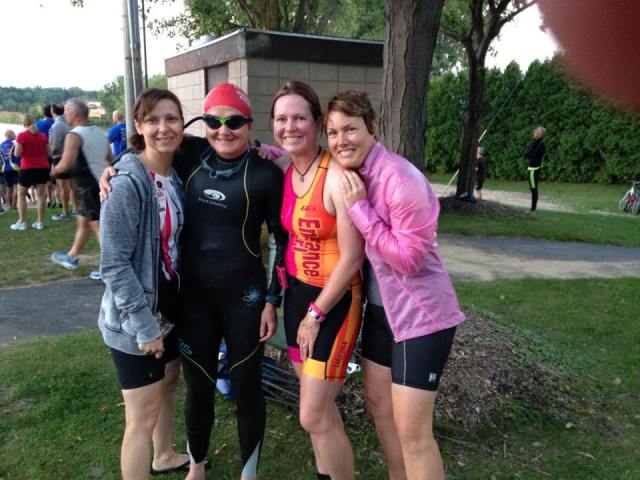 Girls with the ‘betes in Michigan.

I made myself a little list of things to draw strength from.  I will somehow try to write these on my arms and legs so that i can read them as I go.

I know full well that I’ll be kicking myself during the race for not training more and for being weak.  Hopefully I won’t let these voices of negativity get to me.   I know that mental strength is as important if not more important than physical strength in an ironman and negativity will just eat away at you.  The “i wanna stop” voice gets pretty darn strong.

I am hoping that if I ride easy I can power through the marathon and try to give and receive encouragement.  I will try my best to smile.  I am looking forward to cheering my ROI, Trimonster and VQ teammates on the run course.  I have many many friends out there so that will be fun.  And as usual my #1 supporter Tom will be there.  I will look forward to spending the week with my parents afterwards.

Over the next week or so I will try to figure out a nutrition plan and think about my transitions and special needs which will hopefully get me thinking about what I should do on race day! At the end of the day I will just have to do my best!

I am a type 1 diabetic diagnosed at the age of 30. I run marathons, participate in bike races , ironman triathlons and everything in between.
View all posts by Gillian →
This entry was posted in Uncategorized. Bookmark the permalink.

1 Response to This year and IMOO training.